ACL Injury/Anterior Cruciate Ligament Injury (ACL) is one of 2 cruciate ligaments which aids in stabilization of the knee joint. It is a strong band made of connective tissue and collagenous fibers that originate from the anteromedial aspect of the intercondylar region of the tibial plateau and extends posteromedially to attach to the lateral femoral condyle. The anteromedial bundle and posterolateral bundle form the 2 components of the ACL.  [rx][rx][rx] The ACL and the posterior cruciate ligament (PCL) together form a cross (or an “x”) within the knee and prevents excessive forward or backward motion of the tibia in relation to the femur during flexion and extension.

Anterior cruciate ligament injury is when the anterior cruciate ligament (ACL) is either stretched, partially torn, or completely torn. The most common injury is a complete tear. Symptoms include pain, a popping sound during injury, instability of the knee, and joint swelling. Swelling generally appears within a couple of hours.[rx] In approximately 50% of cases, other structures of the knee such as surrounding ligaments, cartilage, or meniscus are damaged.[rx] 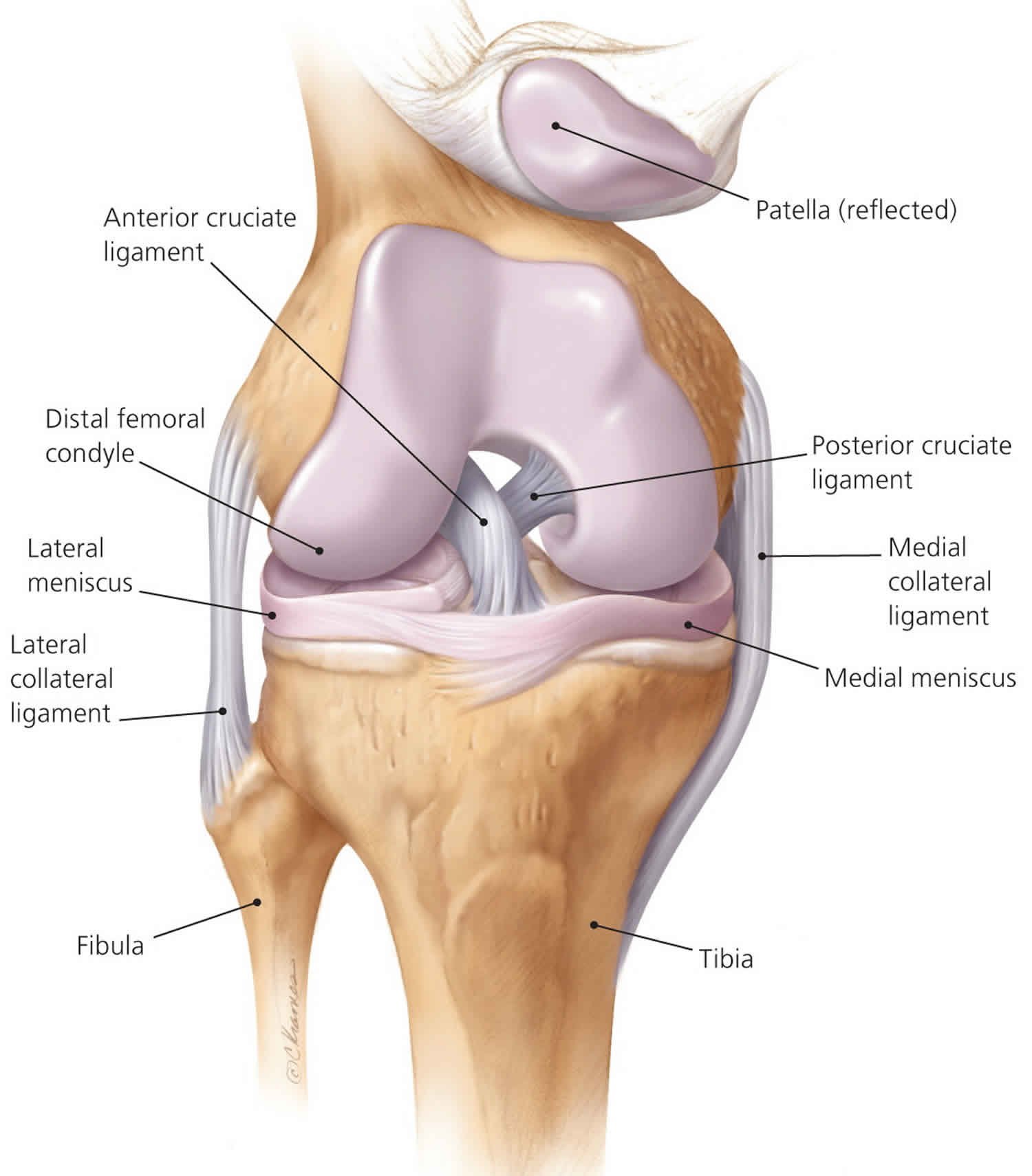 ACL tear Causes may include

These movements cause the tibia to shift away from the femur rapidly, placing strain on the knee joint and potentially leading to the rupture of the ACL. About 80% of ACL injuries occur without direct trauma. Risk factors include female anatomy, specific sports, poor conditioning, fatigue, and playing on a turf field.[rx]

Female athletes are two to eight times more likely to strain their ACL in sports that involve cutting and jumping as compared to men who play the same particular sports.[rx] NCAA data has found relative rates of injury per 1000 athlete exposures as follows:

The highest rate of ACL injury in women occurred in gymnastics, with a rate of injury per 1000 athlete exposures of 0.33. Of the four sports with the highest ACL injury rates, three were women’s – gymnastics, basketball, and soccer.[rx]

Differences between males and females identified as potential causes are the active muscular protection of the knee joint, differences in leg/pelvis alignment, and relative ligament laxity caused by differences in hormonal activity from estrogen and relaxin.[rx][rx] Birth control pills appear to decrease the risk.[rx]

Some studies have suggested that there are four neuromuscular imbalances that predispose women to a higher incidence of ACL injury. Female athletes are more likely to jump and land with their knees relatively straight and collapsing in towards each other, while most of their body weight falls on a single foot and their upper body tilts to one side.[rx] Several theories have been described to further explain these imbalances. These include ligament dominance, quadriceps dominance, leg dominance, and trunk dominance theories.

When an individual has an ACL injury, they are likely to hear a “pop” in their knee followed by pain and swelling. They may also experience instability in the knee once they resume walking and other activities, as the ligament can no longer stabilize the knee joint and keep the tibia from sliding forward.[rx].[rx]

It may be difficult to examine some patients when muscle strength or spasm can hide an injured ACL because of the knee stabilization that they can provide.

Multiple maneuvers are employed to test the ACL and include the anterior drawer, the pivot shift, and the Lachman tests.[rx][rx] These tests should be performed whenever there is suspicion for injury to the anterior cruciate ligament.

An ACL injury can further classify as a grade I, II, or III sprains.

An acute ACL rupture commonly occurs among sports players, especially those aged 14 to 19 years.[rx] The incidence of ACL injury is higher among female athletes due to the following reasons[rx]:

The American Academy Of Orthopedic Surgeons (AAOS) Recommends This Treatment.

Eat Nutritiously During Your Recovery

ACL tears are not usually repaired using suture to sew it back together, because repaired ACLs have generally been shown to fail over time. Therefore, the torn ACL is generally replaced by a substitute graft made of tendon.

Active adult patients involved in sports or jobs that require pivoting, turning or hard-cutting as well as heavy manual work are encouraged to consider surgical treatment. This includes older patients who have previously been excluded from consideration for ACL surgery. Activity, not age, should determine if surgical intervention should be considered.

A patient with a torn ACL and significant functional instability has a high risk of developing secondary knee damage and should therefore consider ACL reconstruction.

It is common to see ACL injuries combined with damage to the menisci, articular cartilage, collateral ligaments, joint capsule, or a combination of the above. The “unhappy triad,” frequently seen in football players and skiers, consists of injuries to the ACL, the MCL, and the medial meniscus.

In cases of combined injuries, surgical treatment may be warranted and generally produces better outcomes. As many as half of meniscus tears may be repairable and may heal better if the repair is done in combination with the ACL reconstruction.

There are 4 types of grafts

The pitfalls of the patellar tendon autograft are

The graft function may be limited by the strength and type of fixation in the bone tunnels, as the graft does not have bone plugs. There have been conflicting results in research studies as to whether hamstring grafts are slightly more susceptible to graft elongation (stretching), which may lead to increased laxity during objective testing. Recently, some studies have demonstrated decreased hamstring strength in patients after surgery.

There are some indications that patients who have intrinsic ligamentous laxity and knee hyperextension of 10 degrees or more may have increased risk of postoperative hamstring graft laxity on clinical exam. Therefore, some clinicians recommend the use of patellar tendon autografts in these hypermobile patients.

Additionally, since the medial hamstrings often provide dynamic support against valgus stress and instability, some surgeons feel that chronic or residual medial collateral ligament laxity (grade 2 or more) at the time of ACL reconstruction may be a contraindication for use of the patient’s own semitendinosus and gracilis tendons as an ACL graft.

The quadriceps tendon autograft is often used for patients who have already failed ACL reconstruction. The middle third of the patient’s quadriceps tendon and a bone plug from the upper end of the knee cap are used. This yields a larger graft for taller and heavier patients. Because there is a bone plug on one side only, the fixation is not as solid as for the patellar tendon graft. There is a high association with postoperative anterior knee pain and a low risk of patella fracture. Patients may find the incision is not cosmetically appealing.

Allografts are grafts taken from cadavers and are becoming increasingly popular. These grafts are also used for patients who have failed ACL reconstruction before and in surgery to repair or reconstruct more than one knee ligament. The advantages of using allograft tissue include the elimination of pain caused by obtaining the graft from the patient, decreased surgery time and smaller incisions. The patellar tendon allograft allows for strong bony fixation in the tibial and femoral bone tunnels with screws.

However, allografts are associated with a risk of infection, including viral transmission (HIV and Hepatitis C), despite careful screening and processing. Several deaths linked to bacterial infection from allograft tissue (due to improper procurement and sterilization techniques) have led to improvements in allograft tissue testing and processing techniques. There have also been conflicting results in research studies as to whether allografts are slightly more susceptible to graft elongation (stretching), which may lead to increased laxity during testing.

The reason for this higher failure rate is unclear. It could be due to graft material properties (sterilization processes used, graft donor age, storage of the graft). It could possibly be due to an ill-advised earlier return to sport by the athlete because of a faster perceived physiologic recovery, when the graft is not biologically ready to be loaded and stressed during sporting activities. Further research in this area is indicated and is ongoing.

Before any surgical treatment, the patient is usually sent to physical therapy. Patients who have a stiff, swollen knee lacking full range of motion at the time of ACL surgery may have significant problems regaining motion after surgery. It usually takes three or more weeks from the time of injury to achieve full range of motion. It is also recommended that some ligament injuries be braced and allowed to heal prior to ACL surgery.

The patient, the surgeon, and the anesthesiologist select the anesthesia used for surgery. Patients may benefit from an anesthetic block of the nerves of the leg to decrease postoperative pain.

The surgery usually begins with an examination of the patient’s knee while the patient is relaxed due the effects of anesthesia. This final examination is used to verify that the ACL is torn and also to check for looseness of other knee ligaments that may need to be repaired during surgery or addressed postoperatively.

If the physical exam strongly suggests the ACL is torn, the selected tendon is harvested (for an autograft) or thawed (for an allograft) and the graft is prepared to the correct size for the patient.

After the graft has been prepared, the surgeon places an arthroscope into the joint. Small (one-centimeter) incisions called portals are made in the front of the knee to insert the arthroscope and instruments and the surgeon examines the condition of the knee. Meniscus and cartilage injuries are trimmed or repaired and the torn ACL stump is then removed.

In the most common ACL reconstruction technique, bone tunnels are drilled into the tibia and the femur to place the ACL graft in almost the same position as the torn ACL. A long needle is then passed through the tunnel of the tibia, up through the femoral tunnel, and then out through the skin of the thigh. The sutures of the graft are placed through the eye of the needle and the graft is pulled into position up through the tibial tunnel and then up into the femoral tunnel. The graft is held under tension as it is fixed in place using interference screws, spiked washers, posts, or staples. The devices used to hold the graft in place are generally not removed.

Variations on this surgical technique include the “two-incision,” “over-the-top,” and “double-bundle” types of ACL reconstructions, which may be used because of the preference of the surgeon or special circumstances (revision ACL reconstruction, open growth plates).

Before the surgery is complete, the surgeon will probe the graft to make sure it has good tension, verify that the knee has full range of motion and perform tests such as the Lachman’s test to assess graft stability. The skin is closed and dressings (and perhaps a postoperative brace and cold therapy device, depending on surgeon preference) are applied. The patient will usually go home on the same day of the surgery.

Various tissues/grafts have been used to anatomically reconstruct the torn ACL which include portions of the extensor mechanism, patellar tendon, iliotibial tract, semitendinosus tendon, gracilis tendon, and menisci. These can all used in autografts i.e grafts taken from the person undergoing surgery. Other methods include the use of allografts and synthetic ligaments. This procedure has the following steps:

The most common procedures for this reconstruction

Other procedures are the LARS artificial ligament,(Ligament Advanced Reinforcement System) iliotibial tract allografts, cadaveric allografts, synthetic materials and grafts from living related donor people, but all materials have their drawbacks. There is the potential for cross infections, breakage, immunological responses, chronic effusions and recurrent instability

On the contrary, anterior translation after double-bundle reconstruction was comparable with the intact ACL at 0° flexion, but the most stable position of the knee is at 15° and 75° flexion.

Physical therapy is a crucial part of successful ACL surgery, with exercises beginning immediately after the surgery. Much of the success of ACL reconstructive surgery depends on the patient’s dedication to rigorous physical therapy. With new surgical techniques and stronger graft fixation, current physical therapy uses an accelerated course of rehabilitation.

Common Adverse Effects of NSAID Use