Hormone Interactions/Hormones are chemical messengers that interact with receptors present on the surface of a cell membrane or with receptors that are located inside the cell, in the cytoplasm (cytoplasmic receptors). This interaction gives rise to the effects hormones exert on target cells and organs.

Different types of hormones have varying chemical structures. While some are peptides or proteins composed of amino acids, others are steroid hormones derived from lipids. Some peptide hormones include a covalently attached oligosaccharide, in which case they are termed glycoproteins. The different chemical structures of varying types of hormones mean they all have receptors with a specific shape, size, and function.

Most water-soluble hormones such as glycoproteins and peptides combine with a receptor present on the plasma membrane because they are not lipid-soluble and cannot move through the phospholipid cell membrane. As this hormone binds to its receptor, a cascade of reactions is triggered within the cytoplasm of the cell.

The integral membrane receptors usually function through the activation of secondary messengers inside the plasma membrane which carry out intracellular signal transduction to convey the effects of the hormones that cannot enter the cells.

Receptors for lipid-soluble hormones such as the steroid hormones estrogen and thyroxine lie within the cytoplasm. These hormones need to enter the cell by crossing the cell membrane. Once bound, the hormone-receptor complex moves into the nucleus where it binds to specific DNA sequences and acts as a transcription factor, either increasing or suppressing the expression of certain genes.

Interactions of Hormones at Target Cells

Hormones that act to return body conditions to within acceptable limits from opposite extremes are called antagonistic hormones.

Permissiveness is the situation in which a hormone cannot exert its full effects without the presence of another hormone.

Synergism occurs when two or more hormones produce the same effects in a target cell and their results are amplified.

Antagonism occurs when a hormone opposes or reverses the effect of another hormone.

antagonism: When a substance binds to the same site an agonist would bind to without causing activation of the receptor.

synergism: Two or more things functioning together to produce a result not independently obtainable.

permissiveness: A certain relationship between hormones and the target cell when the presence of one hormone, at a certain concentration, is required in order to allow a second hormone to fully affect the target cell.

In biology, permissiveness is a certain relationship between hormones and the target cell. It can be used to describe situations in which the presence of one hormone, at a certain concentration, is required to allow a second hormone to fully affect the target cell.

For example, thyroid hormones increase the number of receptors available for epinephrine at the latter’s target cell, thereby increasing epinephrine’s effect at that cell. Without the thyroid hormones, epinephrine would have only a weak effect. Another example is cortisol, which exerts a permissive effect on growth hormones.

If conditions exceed the lower limits of homeostasis, a different action, usually the production of a second hormone, is triggered. Hormones that act to return body conditions to within acceptable limits from opposite extremes are called antagonistic hormones. The two glands most responsible for homeostasis are the thyroid and the parathyroid.

The regulation of blood glucose concentration (through negative feedback ) illustrates how the endocrine system maintains homeostasis by the action of antagonistic hormones. Bundles of cells in the pancreas, called the islets of Langerhans, contain two kinds of cells: alpha cells and beta cells. These cells control blood glucose concentration by producing the antagonistic hormones insulin and glucagon.

The glucose in the liver originates from the breakdown of glycogen. Glucagon also stimulates the production of ketone bodies from amino acids and fatty acids. Ketone bodies are an alternative energy source to glucose for some tissues. When blood glucose levels return to normal, glucagon secretion discontinues through negative feedback. 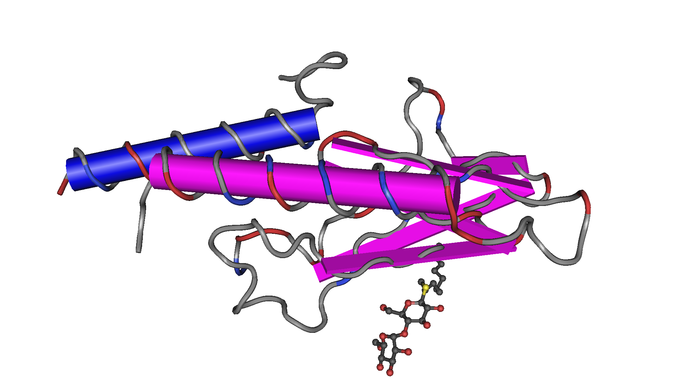 The glucagon receptor structure: Glucagon is a pancreatic peptide hormone that, as a counter-regulatory hormone for insulin, stimulates glucose release by the liver and maintains glucose homeostasis.

Synergism occurs when two or more hormones combine to produce effects greater than the sum of their individual effects. For example, testosterone and follicle-stimulating hormones are required for normal sperm production.

downregulation
decrease in the number of hormone receptors, typically in response to chronically excessive levels of a hormone

hormone receptor
protein within a cell or on the cell membrane that binds a hormone, initiating the target cell response

protein kinase
enzyme that initiates a phosphorylation cascade upon activation

upregulation
increase in the number of hormone receptors, typically in response to chronically reduced levels of a hormone