CN VIII injuries are the result of pathological processes or injuries that commonly involve the cerebellopontine angle (CPA), the internal auditory canal (IAC), or the inner ear. In such cases, symptoms such as vertigo, nystagmus, tinnitus, and sensorineural hearing loss may occur.[rx][rx][rx]

The vestibulocochlear nerve, or the eighth cranial nerve (CN VIII), is the sensory nerve which consists of two divisions. Each emerge from their respective roots:

The roots arise from the vestibular and cochlear nuclei located in the brainstem. The fibers from both roots merge to form the vestibulocochlear trunk of the nerve that is found in the posterior cranial fossa in the petrous part of the temporal bone. When the vestibulocochlear nerve reaches the inner ear, it again splits into the vestibular and cochlear part which supply target tissues of the inner ear. Since they provide special sensory functions (balance and hearing) this nerve would be functionally categorized as special somatic afferent (SSA) instead of the general somatic afferent.

Since there are two functional components of the vestibulocochlear nerve, it has two groups of nuclei: the vestibular and the cochlear nuclei. They are found within the vestibular area, a space in the lateral corner of the rhomboid fossa of the brainstem. They contain the bodies of the SSA neurons.

The vestibular nerve has four nuclei placed in the lateral corner of the rhomboid fossa and they are all special somatic afferent (SSA):

These nuclei belong to the vestibular component of the vestibulocochlear nerve and play a role in the function of balance, spatial orientation and modification of muscle tone.

The vestibular nuclei are aligned within the rhomboid fossa in such a way that they form two vertical columns, one medial and one lateral. In the medial column is the medial nucleus, whereas the inferior, lateral and the superior nuclei form the lateral column.

From the medial vestibular nucleus, the medial vestibulospinal tract emerges. This tract synapses with the neurons of laminas VII and VIII of the cervical and thoracic segments of the spinal cord. This pathway decussates partially and joins the major associative pathway of the brainstem – the medial longitudinal fasciculus – through which it influences the movements of the neck and the upper limbs as a response to the stimuli that reach the vestibular nuclei.

The cochlear nerve has two nuclei, and both are special somatic afferent (SSA):

These nuclei are the most lateral of all the cranial nuclei. They are located medially to the inferior peduncle of the cerebellum in the lateral angle of the rhomboid fossa.

In these nuclei are the bodies of second-order neurons of the acoustic pathway. The first-order neurons of the acoustic pathway are located within the cochlear spiral ganglion in the inner ear. The dendrites (peripheral extensions) of these neurons receive the stimuli from the receptors in the organ of Corti, whereas their axons (central extensions) together form the cochlear part of the vestibulocochlear nerve.

The cochlear nerve enters the brainstem and terminates within its cochlear nuclei. Each cochlear fiber has two branches:

The neurons of the cochlear nuclei give rise to striatal fibers which create stripes of white matter. These stripes communicate with the tertiary centers of the nervous system in which gathered information is integrated, interpreted, and consciously perceived. The posterior nucleus sends two stripes: the posterior and the intermediate cochlear stripes, whereas the anterior nucleus sends the third, the anterior cochlear stripe. All three of these stripes pass through the reticular formation of the pons, cross to the contralateral side of the brain at the level of the inferior part of the pontine tegmentum, and finally, at the level of the superior olivary nucleus, all three stripes merge to form the lateral lemniscus. Nearly half of the striatal fibers from the posterior and the intermediate cochlear stripes do not participate in the forming of the lateral lemniscus, nor do they cross to the contralateral side. Instead, they synapse with the ipsilateral superior olivary nucleus and join the ipsilateral lateral lemniscus. 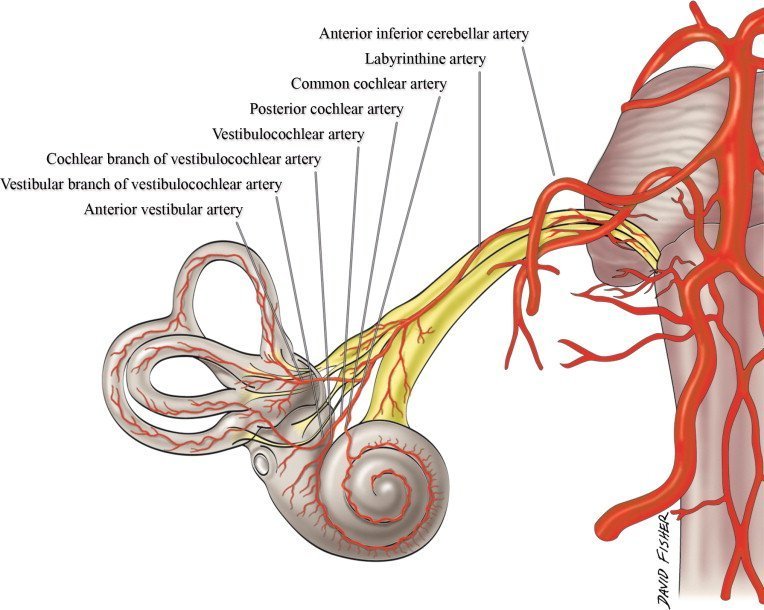 The Cochlear Nerve and Auditory System

The cochlear nerve is responsible for transmitting auditory signals from the inner ear to the cochlear nuclei, within the brainstem, and ultimately to the primary auditory cortex, within the temporal lobe.[rx][rx]

The cochlea is a spiral, fluid-filled cavity in the bony auditory labyrinth that contains the Organ of Corti, along its basilar membrane. The bipolar neurons making up the spiral (cochlear) ganglion create the link between the central nervous system (CNS) and the Organ of Corti. The spiral ganglion is located at the spiral canal of the modiolus. Type I and Type II neurons populate the spiral ganglion, and both send peripheral processes to the ciliated hair cells of the Organ of Corti and central processes that join together to form the cochlear nerve. Type 1 neurons are comparatively larger, myelinated, and account for the 90% cochlear nerve cells. Type 2 neurons are smaller and nonmyelinated. Type I neurons project to the inner hair cells of the Organ of Corti, while Type II neurons project to the outer hair cells.[rx][rx][rx][rx]

After the cochlear nuclei, the fibers cross and join the contralateral lateral lemniscus toward the midbrain inferior colliculus. Next, the fibers reach the thalamic medial geniculate nucleus, before traveling to the primary auditory cortex, within the temporal lobe.[rx][rx]

The peripheral vestibular apparatus is located within the temporal bone, and it consists of a bony and membranous labyrinth. The membranous labyrinth contains the sensory neuroepithelium and is located within the bony labyrinth, suspended in the perilymph. There are 5 components of the vestibular apparatus: the utricle, saccule, and three semicircular ducts (contained within the semicircular canals). The two types of neuroepithelium are the macula and crista ampullar, which both contain sensory hair cells. The utricle and saccule contain macula, while the semicircular canals contain crista ampullar.[rx]

The stimulation of the hair cells results in depolarization and increased calcium (Ca) influx, leading to increased firing of afferent vestibular nerve fibers. Those fibers travel to the vestibular ganglion (Scarpa’s ganglion), located in the IAC. The ganglion is composed of bipolar neurons that send peripheral processes to the vestibular apparatus and central processes that join together to form the vestibular nerve. The ganglion is separated into superior and inferior divisions. The superior division receives input from the utricle and superior and lateral semicircular ducts. The inferior division receives input from the saccule and posterior semicircular duct.[rx]

The superior nucleus receives input from the superior and posterior semicircular ducts and mediates the vestibulo-ocular reflex.[rx]

The lateral nucleus receives input from all components of the vestibular apparatus and the vestibulocerebellum. Descending projections become the lateral vestibular tract within the ipsilateral spinal cord. This tract helps mediate the vestibulospinal reflex and maintain posture and balance.[rx]

The inferior nucleus receives input from the utricle and saccule and sends fibers to the other three vestibular nuclei and to the cerebellum.[rx]

From the superior vestibular nucleus, ascending fibers travel through the MLF to the oculomotor, trochlear, and abducens nerve nuclei to innervate the extraocular muscles, generating the vestibulo-oculomotor reflex.[rx]

The vestibular and cochlear portions of the vestibulocochlear nerve are functionally discrete, and so originate from different nuclei in the brain:

Both sets of fibres combine in the pons to form the vestibulocochlear nerve. The nerve emerges from the brain at the cerebellopontine angle and exits the cranium via the internal acoustic meatus of the temporal bone.

The vestibulocochlear nerve is unusual in that it primarily consists of bipolar neurons. It is responsible for the special senses of hearing (via the cochlear nerve), and balance (via the vestibular nerve).

The cochlea detects the magnitude and frequency of sound waves. The inner hair cells of the organ of Corti activate ion channels in response to vibrations of the basilar membrane. Action potentials travel from the spiral ganglia, which house the cell bodies of neurons of the cochlear nerve.

The magnitude of the sound determines how much the membrane vibrates and thereby how often action potentials are triggered. Louder sounds cause the basilar membrane to vibrate more, resulting in action potentials being transmitted from the spiral ganglia more often and vice versa. The frequency of the sound is coded by the position of the activated inner hair cells along the basilar membrane.

Information about the position of the head is used to coordinate balance and the vestibular-ocular reflex. The vestibule-ocular reflex (also called the oculocephalic reflex) allows images on the retina to be stabilized when the head is turning by moving the eyes in the opposite direction. It can be demonstrated by holding one finger still at a comfortable distance in front of you and twisting your head from side to side whilst staying focused on the finger.