Chemotherapy is a type of cancer treatment that uses one or more anti-cancer drugs (chemotherapeutic agents) as part of a standardized chemotherapy regimen. The term chemotherapy refers to the drugs that prevent cancer cells from dividing and growing. It does this by killing the dividing cells. Chemotherapy may be given with a curative intent (which almost always involves combinations of drugs), or it may aim to prolong life or to reduce symptoms (palliative chemotherapy). Chemotherapy is one of the major categories of the medical discipline specifically devoted to pharmacotherapy for cancer, which is called medical oncology.

There are many chemotherapy drugs that are grouped into classes depending on how they work. Combining chemotherapy drugs from different classes can make the treatment work better because the different drugs attack cancer cells at different points in their growth cycle. It may also prevent resistance and help lower the chance of cancer coming back (recurrence). Some types of chemotherapy include:

How is Chemotherapy Given

Other Drug Treatments for Cancer

The traditional drugs used for chemotherapy are an important part of treatment for many cancers. The drugs affect both cancer cells and healthy cells. But scientists have designed newer drugs that work more specifically to treat cancer. These treatments cause different side effects.

Doctors may use these newer cancer drugs as the only drug treatment. But they are usually added to traditional chemotherapy. These types of treatment include:

Other ways that chemotherapy is given include

Chemotherapy in the treatment of cancer can have different goals. This is why we differentiate between the following types of chemotherapy:

How Chemotherapy is Done 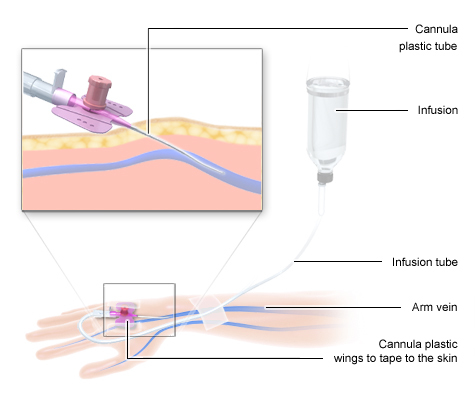 Chemotherapy: Infusion in a vein 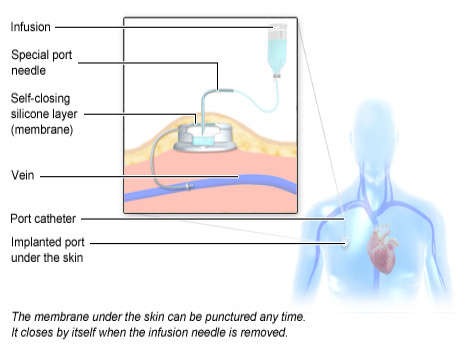 Chemotherapy: Infusion with a port

In chemotherapy, cancer is treated with cytostatics at specific intervals. This is also referred to as treatment cycles or treatment schedules. Various factors influence the number of cycles and the intervals between the individual treatments:

Treatment schedules are tested in studies, which allows them to be optimized over time. How exactly a treatment is done not only depends on research results, however but also on personal wishes and the state of health of the individual person. If chemotherapy is causing severe adverse effects, for example, it can make sense to deviate from the commonly used therapy schedule.

Different tests like blood tests, tissue samples and imaging techniques like computed tomography, for example, help find out whether a tumor responds to the chemotherapy. If this is not the case, other substances can be used for treatment, or treatment can be stopped.

There are a number of strategies in the administration of chemotherapeutic drugs used today. Chemotherapy may be given with a curative intent or it may aim to prolong life or to palliate symptoms[rx].

All chemotherapy regimens require that the recipient be capable of undergoing the treatment. Performance status is often used as a measure to determine whether a person can receive chemotherapy, or whether dose reduction is required. Because only a fraction of the cells in a tumor die with each treatment (fractional kill), repeated doses must be administered to continue to reduce the size of the tumor.[rx]Current chemotherapy regimens apply drug treatment in cycles, with the frequency and duration of treatments limited by toxicity.[rx]