Colon polyps also known as colorectal polyps are their macroscopic appearance as sessile (flat, arising directly from the mucosal layer) or pedunculated (extending from the mucosa through a fibrovascular stalk) growths on the lining of your colon and rectum. You can have more than one colon polyp. Colon polyps are protrusions occurring in the colon lumen most commonly sporadic or as part of other syndromes. Polyps are classified as diminutive if 5 mm in diameter or less, small if 6 to 9 mm, or large if they are 1 cm in diameter or more. Polyps can be depressed, flat, sessile or pedunculated. Few polyps arise from submucosa including lipomas, carcinoids, or lymphoid aggregates. Most commonly, however, they result from the mucosa, and they can be adenomatous, serrated, or non-neoplastic.

Polyps in the colon can vary in size and number. There are 5 types of colon polyps 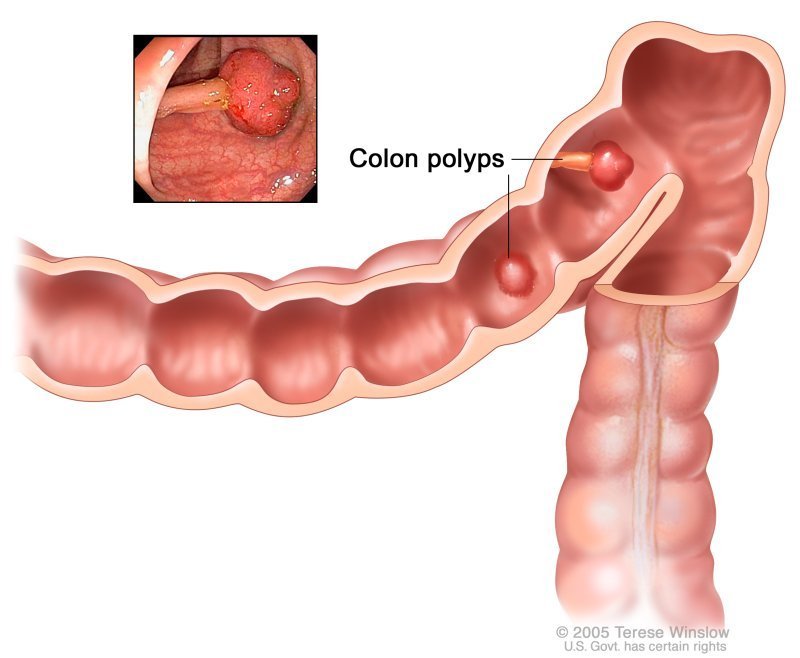 Hereditary disorders that cause colon polyps include:

But some people with colon polyps experience:

Many other health problems can also cause these symptoms. However, if you have bleeding from your rectum or blood in your stool, contact your doctor right away.

Doctors can find colon polyps only by using certain tests or procedures, such as a colonoscopy or imaging study. Your doctor may first take a medical and family history and perform a physical exam to help decide which test or procedure is best for you.

In most cases, doctors use special tools during a colonoscopy or flexible sigmoidoscopy to remove colon polyps. After doctors remove the polyp, they send it for testing to check for cancer. A pathologist will review the test results and send a report to your doctor. Doctors can remove almost all polyps without surgery.

If you have colon polyps, your doctor will ask you to get tested regularly in the future because you have a higher chance of developing more polyps.

Your doctor is likely to remove all polyps discovered during a bowel examination.

Some types of colon polyp are far likelier to become malignant than are others. But a doctor who specializes in analyzing tissue samples (pathologist) usually must examine polyp tissue under a microscope to determine whether it’s potentially cancerous.

Call your doctor right away if you have any of the following symptoms after he or she removes a colon polyp:

How can I prevent colon polyps?

Researchers don’t know a sure way to prevent colon polyps. However, you can take steps to lower your chances of developing colon polyps.

You can make the following healthy lifestyle choices to help lower your chances of developing colon polyps:

How Can I Prevent Colon Polyps?

Healthy habits can lower your odds of having colon polyps. For example, you should: