What Is Prostate Cancer?Prostate cancer is the development of cancer in the prostate, a gland in the male reproductive system. Most prostate cancers are slow-growing; however, some grow relatively quickly. The cancer cells may spread from the prostate to other areas of the body, particularly the bones and lymph nodes. It may initially cause no symptoms.[rx] In later stages, it can lead to difficulty urinating, blood in the urine, or pain in the pelvis, back, or when urinating.[rx] A disease known as benign prostatic hyperplasia may produce similar symptoms.[rx] Other late symptoms may include feeling tired due to low levels of red blood cells.[rx]

Almost all prostate cancers are adenocarcinomas. These cancers develop from the gland cells (the cells that make the prostate fluid that is added to the semen).

Other types of cancer that can start in the prostate include:

Some prostate cancers grow and spread quickly, but most grow slowly. In fact, autopsy studies show that many older men (and even some younger men) who died of other causes also had prostate cancer that never affected them during their lives. In many cases, neither they nor their doctors even knew they had it.

The prostate is roughly 3 centimeters long, about the size of a walnut, and weighs approximately 20 grams. Its function is to produce about a third of the total seminal fluid.[rx]

The prostate gland is located in the male pelvis at the base of the penis.  It is below (inferior) to the urinary bladder and immediately anterior to the rectum.[rx]

The prostate surrounds the posterior part of the urethra, but this can be misleading. The posterior urethra, prostatic urethra, and proximal urethra all describe the same anatomy as there is no difference between the internal lining of the prostate and the urethra; they are the same entity.[rx]

The prostate is primarily made up of glandular tissue which produces fluid that constitutes about 30% to 35% of the semen. This prostatic portion of the semen nourishes the sperm and provides alkalinity which helps maintain a high pH.  (The seminal vesicles produce the rest of the seminal fluid.)[rx]

The prostate gland requires androgen (testosterone) to function optimally. This is why hormonal therapy (testosterone deprivation) is so effective. Castrate resistant tumors are thought to generate intracellular androgens.[rx]

Prostate cancer is most common in the peripheral zone which is primarily that portion of the prostate that can be palpated via digital rectal examination (DRE).[rx]

The prostate accumulates zinc and produces citrate. However, increased dietary or supplemental zinc and citrate do not appear to have any influence on prostatic health or the development of prostate cancer.[rx]

Prostate cancer is generally linked to the consumption of the typical Western diet.[rx]

Prostate cancer is linked to some medications, medical procedures, and medical conditions.[rx]

Infections may be associated with the incidence and development of prostate cancer.[rx]

Symptoms of prostate cancer can include

Males who do experience symptoms may notice

In 2016, the World Health Organization (WHO) proposed a new classification system based on clinical experience with the old Gleason scoring system that suggested very little difference in clinical outcomes in lower Gleason score patients, but somewhat different ones in the higher grades.  The following is a summary of the “New” Gleason system:[rx]

In clinical practice, group 1 is considered “low grade,” Group 2 is “intermediate grade,” and group 3 or higher is “high grade” disease.

Digital rectal examination (DRE) may detect prostate abnormalities, asymmetry, and suspiciously hard nodules but is not considered a definitive test for prostate cancer by itself. An abnormal DRE initially uncovers about 20% of all prostate cancers.[rx]

The actual risk estimates will vary by age group, but as a general guide:

Results are reported very straight-forwardly as either

In general, predictive testing that includes clinical variables (Select MDx and “4K”) is considered somewhat more reliable than those tests which do not (PHI, ExoDx, and PCA3).[rx]

Ultrasound and MRI are the main imaging modalities used for initial prostate cancer detection and diagnosis.[rx]

The studies reported that 100% of the PIRADS 3 patients with all the above risk factors positively showed clinically significant disease, 0% if they had no risk factors.  Incorporating these and other risk factors as well as genomic analysis testing into a workable clinical algorithm for patients with PIRADS 3 lesions would greatly improve our ability to identify those with the aggressive, clinically significant disease while safely avoiding uncomfortable and unnecessary biopsies in the rest.

Controversies in MRI use for men with elevated PSA levels

When an MRI identifies a suspicious area, there are several ways to target or highlight the lesion for improved biopsies:[rx]

If the MRI is negative, a recent meta-analysis concluded that the most useful predictive factor of not finding significant prostate cancer in men with negative MRI studies (other than a specific biomarker test) was a PSA density less than 0.15ng/ml [rx].

If cancer is suspected, a prostate biopsy is usually performed. This is almost always done with transrectal ultrasound guidance to make sure that all areas of the prostate are adequately sampled. The most commonly used pattern is to take two specimens from each of three areas (base, mid-gland, and apex) on both sides. This is called a 12 core sextant biopsy. The purpose is to better identify the extent and exact location of the tumor.[rx]

Prostatic imaging with MRI is becoming increasingly important, particularly in highly suspicious cases where the initial non-MRI guided biopsy was negative, instead of “saturation” biopsies.

The Grade Group depends on the Gleason score.

The PSA test measures the level of PSA in the blood. PSA is a substance made by the prostate that may be found in an increased amount in the blood of men who have prostate cancer.

Stages are used for prostate cancer 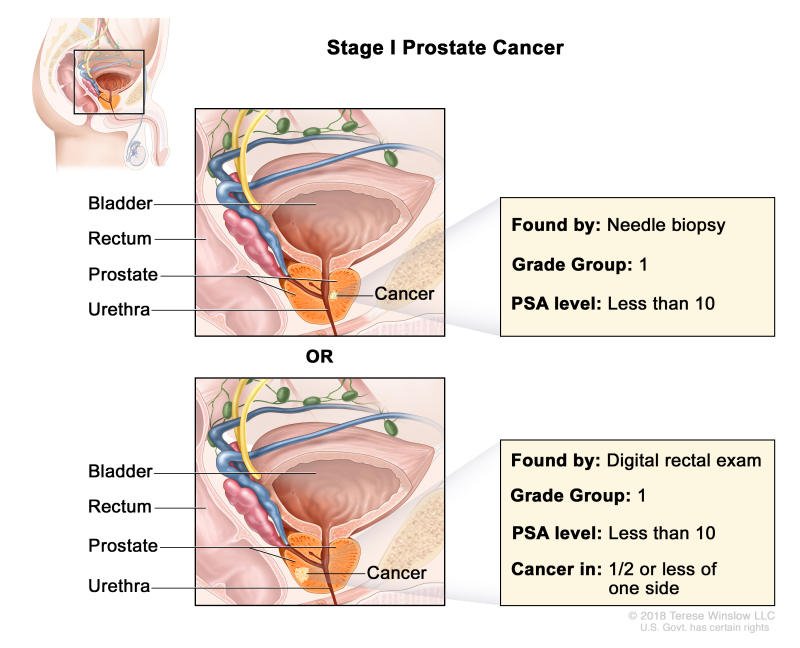 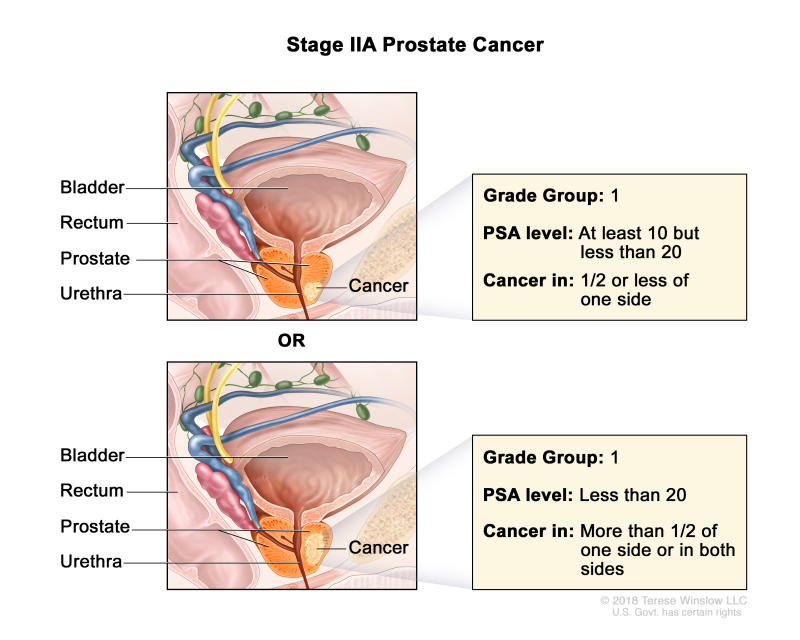 Stage III[rx] is divided into stages IIIA, IIIB, and IIIC.

Stage IIIB prostate cancer – Cancer has spread from the prostate to the seminal vesicles or to nearby tissue or organs, such as the rectum, bladder, or pelvic wall. The prostate-specific antigen can be any level and the Grade Group is 1, 2, 3, or 4.

In stage IIIB – cancer has spread from the prostate to the seminal vesicles[rx] or to nearby tissue or organs[rx], such as the rectum, bladder[rx], or pelvic wall. The PSA can be any level and the Grade Group is 1, 2, 3, or 4.

Stage IIIC prostate cancer – Cancer is found in one or both sides of the prostate and may have spread to the seminal vesicles or to nearby tissue or organs, such as the rectum, bladder, or pelvic wall. The prostate-specific antigen can be any level and the Grade Group is 5.

In stage IIIC – cancer is found in one or both sides of the prostate and may have spread to the seminal vesicles[rx] or to nearby tissue or organs, such as the rectum, bladder[rx], or pelvic wall. The PSA can be any level and the Grade Group is 5.

Stage IV is divided into stages IVA and IVB.

Stage IVA prostate cancer – Cancer is found in one or both sides of the prostate and may have spread to the seminal vesicles or to nearby tissue or organs, such as the rectum, bladder, or pelvic wall. Cancer has spread to nearby lymph nodes. The prostate-specific antigen can be any level and the Grade Group is 1, 2, 3, 4, or 5.

In stage IVA – cancer is found in one or both sides of the prostate and may have spread to the seminal vesicles[rx] or to nearby tissue or organs, such as the rectum, bladder, or pelvic wall. Cancer has spread to nearby lymph nodes[rx].

Testing For Evidence of Tumor Spread

CT scans, MRIs, bone scans and PET Scans can evaluate for any cancer spread within the abdomen and pelvis, particularly to the regional and para-aortic lymph nodes.

Depending on the situation, each man can choose one of the following options:

The first decision in managing prostate cancer is determining whether any treatment at all is needed. Prostate cancer, especially low-grade tumors, often grow so slowly that frequently no treatment is required; particularly in elderly patients and those with comorbidities that would reasonably limit life expectancy to 10 additional years or less.

Use of calcium with Vitamin D supplements, along with a bisphosphonate or rank ligand inhibitor, is recommended in long-term hormonal treatment (typically defined as 1 year or longer) to prevent bone loss. A baseline DEXA scan is suggested.[rx][rx]

Trans-urethral resection of the prostate (TURP)

The serum PSA should become and remain undetectable after successful radical prostatectomy surgery. If this cannot be achieved or if there are positive margins after surgery, salvage radiation therapy should be considered.[142]

Chemotherapy in the modern era typically consists of docetaxel in addition to modified hormonal therapy.

About 90% of patients with CRPC will develop bony prostate cancer metastases which can be extremely painful; therefore, much of the therapy at this stage is directed at bone.[rx]

There is no clear evidence that either radical prostate surgery or radiation therapy have a significant survival advantage over the other, so treatment selection has relatively little effect on life expectancy.[rx]

Palliative Care focuses on treating the symptoms of cancer and improving quality of life. The goal of palliative care is symptom control and pain relief rather than curing cancer.

PSA Testing: The Pros and the Cons

More impressively, according to the National Cancer Institute, since 1992 the death rate from prostate cancer in the United States has dropped by an amazing 44% that is substantially due to PSA screenings resulting in earlier prostate cancer diagnosis and treatment.

The current controversy is whether PSA screening provides sufficient benefits to offset the complications and side effects of “unnecessary” biopsies and curative therapies since most men with prostate cancer will have slow-growing, low-grade cancers for whom definitive, curative therapy often causes considerable harm with little or no survival benefit.

Screening options include the digital rectal exam and a prostate-specific antigen (PSA) blood test. Such screenings may lead to a biopsy with some associated risks. Transrectal ultrasound has no role in prostate cancer screenings.

Routine screening with a DRE and particularly a PSA test has become very controversial. Here are some of the arguments for and against:

In Favor of PSA Screenings

Overall prognosis, cancer-specific survival, and risk of metastases are best assessed in post-radical prostatectomy patients with a genomic test that serves as a prognostic marker of cancer control outcomes.