What Is Transversus abdominis Muscle?/Transversus abdominis (Transversalis muscle), so-called from the direction of its fibers, is the most internal of the flat muscles of the abdomen, being placed immediately beneath the obliquus internus. It arises, by fleshy fibers, from the lateral third of the inguinal ligament, from the anterior three-fourths of the inner lip of the iliac crest, from the inner surfaces of the cartilages of the lower six ribs, interdigitating with the diaphragm, and from the lumbodorsal fascia. The muscle ends in front in a broad aponeurosis, the lower fibers of which curve downward and medial ward, and are inserted, together with those of the Obliquus internus, into the crest of the pubis and pectineal line, forming the inguinal aponeurotic falx. 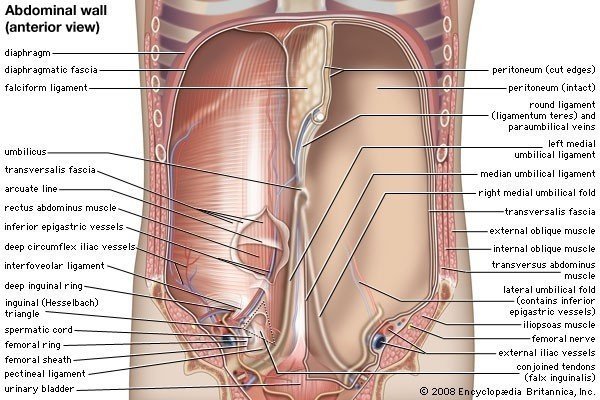 The transverse abdominal muscle (TVA), also known as the transverse abdominis, transversalis muscle and transversus abdominis muscle, is a muscle layer of the anterior and lateral (front and side) abdominal wall which is deep to (layered below) the internal oblique muscle. It is thought by most fitness instructors to be a significant component of the core.

At A Glance Transversus Abdominis

The transversus abdominis is the deepest of the flat muscles, with transversely running fibers. Deep to this muscle is a well-formed layer of fascia, known as the transversal fascia.

The part of transversus abdominis, which originates from the costal cartilages, interdigitate with the attachment of diaphragm from the same place.

Transversus abdominis is inserted into:

The lowest tendinous fibers of transversus joint similar fibers from the internal oblique to form the conjoint tendon, which is fixed to the pubic crest and the pectineal line.

It should be appreciated that the posterior border of external oblique muscle is free, while the same borders of the internal oblique and transversus abdominis are attached to the lumbar vertebrae through the lumbar fascia.

It receives its blood supply from;

It is innervated by the branches of the following nerves.

Do 15 of each of these exercises (or, for the plank, five 10-second holds with minimal rest in between), then repeat for two to three sets total. If that’s too much, try 10 reps–or work your way up to 20 for an extra challenge.

“This exercise is a great way to really focus on that hollow hold or the pelvic tilt and get those abs engaged correctly,” says Lefkowith.

“These are a great way to learn to properly engage your core especially if you focus on shorter, more intense holds,” says Lefkowith.

“These work on core stability and they activate the glutes as you work your abs,” says Lefkowith.

Isolated abs exercises can help with activating your whole core before a workout, but your abs should also be working during larger movements. Don’t forget to stay engaged during compound moves that work your core along with other muscle groups, says Lefkowith—think goblet squats, dumbbell thrusters, and deadlifts.