What Is Rectus Abdominis Muscle/Rectus abdominis muscle is composed of a pair of vertically oriented muscles. They are one of the two pairs of muscles that contribute to the anterior abdominal wall. The name rectus abdominis means straight abdominal and is indicative of the parallel direction the fibers of the muscle take as they pass from their origin to their point of insertion. The muscle has a strap-like shape, and is narrower inferiorly, widening as it passes superiorly.

The rectus abdominis muscle, also known as the abdominal muscle or abs, is a paired muscle running vertically on each side of the anterior wall of the human abdomen, as well as that of some other mammals. There are two parallel muscles, separated by a midline band of connective tissue called the linea alba. It extends from the pubic symphysis, pubic crest, and pubic tubercle inferiorly, to the xiphoid process and costal cartilages of ribs V to VII superiorly. The proximal attachments are the pubic crest and the pubic symphysis. It attaches distally at the costal cartilages of ribs 5-7 and the xiphoid process of the sternum.[rx] 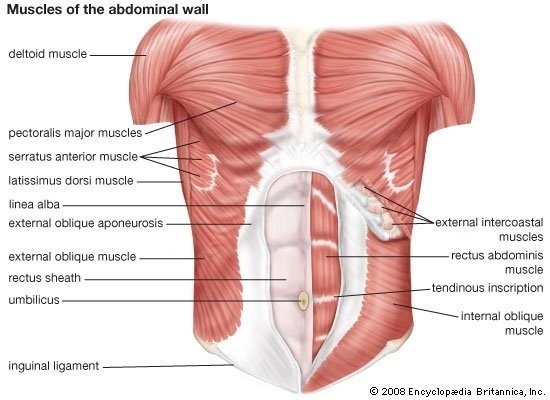 The rectus abdominis has many sources of arterial blood supply. Classification of the vascular anatomy of muscles

The Function of Rectus Abdominis Muscle

Rectus abdominis, along with other muscles of the anterior abdominal wall, perform a number of important functions.